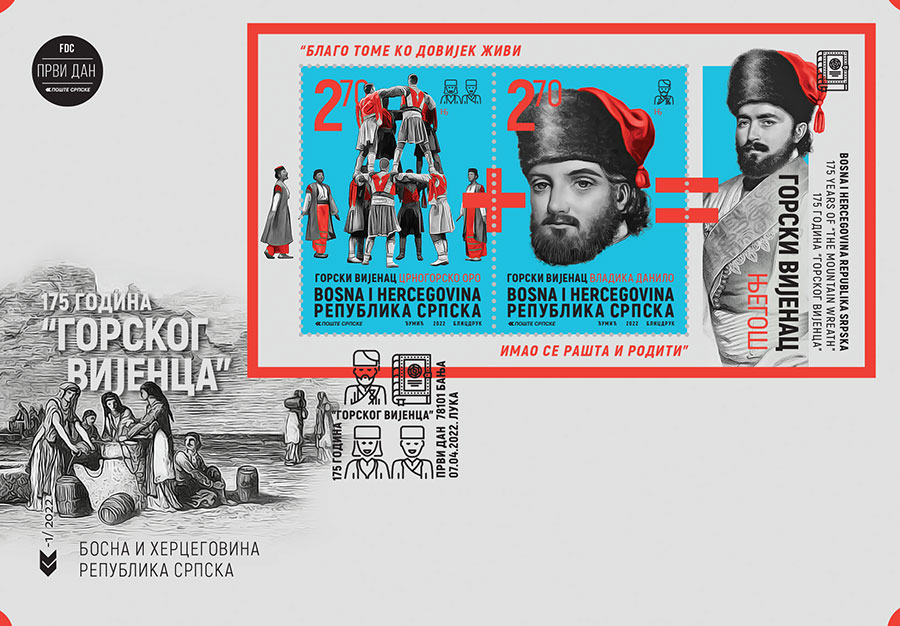 175 Years of the Mountain Wreath

“The Mountain Wreath” is a reflective-heroic poem in the form of a folk drama by Peter II Petrovic Njegos, written in the era of Serbian romanticism. The work was published in Vienna in 1847 in the Serbian language.

In “The Mountain Wreath”, Njegos weaved the entire Montenegrin history, sang the most important events from the past, from the time of Nemanjic to the beginning of the 18th century, painted everyday Montenegrin life, their holidays and gatherings, gave folk customs, beliefs and understandings. In his 2819 verses, three civilizations found its place, which touched and intertwined on Montenegrin soil. The first is the Montenegrin heroic-patriarchal civilization, whose highest expression is classical Montenegro. The second, Turkish Oriental-Islamic civilization, and the third, Venetian Western Europe.

It is interesting that Njegos did not particularly emphasize any character as a hero in the work “The Mountain Wreath”. The heroes here are the people. The bearer of collective consciousness is the circle that represents the people. However, the people are not only expressed through the chariot, but also through individuals in the form of a priest, a woman, a child, a prince. They all represent the Montenegrin mentality of that time typical of that environment. So, despite the fact that we do not have an individual who represents the main character, which we are used to, we have characters who should definitely be highlighted, such as Bishop Danilo and Abbot Stefan, Vuk Micunovic, and Vuk Mandusic and others who wove themselves into the wreath of freedom and resistance. The Montenegrin collective is marked by great moral and physical strength, and above all, bravery and heroism. Heroism means preserving honor and dignity, cowardice has never been an option. It is important not to obey, and that is what this small nation did. Fighting for freedom and independence is man's greatest honor and duty. This is the main guiding thought throughout the work.

Bishop Danilo himself has shown himself to be a humanist from the beginning and in every situation: he despises force and every kind of tyranny, and so he says:

the wild boar has, not the man.

To whom the law lies in the mace,

his tracks stink of inhumanity. ”