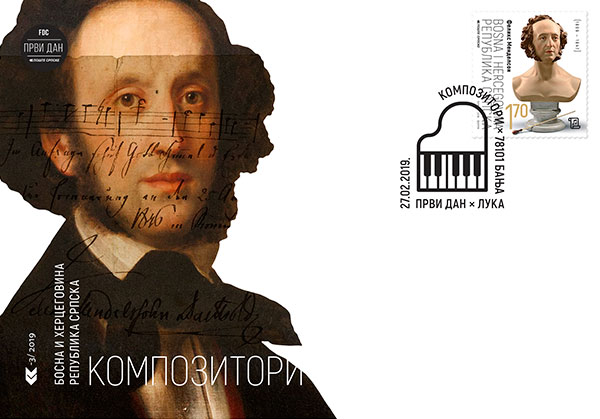 Felix Mendelssohn was born in Hamburg in 1809. He was a German composer (Jewish) of early Romanticism. Mendelssohn was often found as the biggest music wonder child after Volfgange Amadeus Mozart. The first hours of the piano were given to him by his mother. When he was seven he was taught by Mary Bigot in Paris. From 1817 he studied the composition by Karl Friedrich Celter in Berlin. The first public concert performance was probably when he was nine years old, when he participated in concert chamber music. As a child he was a prolific composer and when he was thirteen he wrote the first published piece, the piano quartet.
In addition to music, Mendelssohn's education included art, literature, languages and philosophy. He was skilled in drawing pencil and painting watercolors, he could speak (in addition to his native German), English, Italian and Latin, and was interested in classical literature.
Mendelssohn wrote twelve string symphonies between the age of twelve and fourteen. These works have been ignored for almost a century, but today they can occasionally be heard on the concert repertoire. In 1824, while still fifteen years old, he wrote his first symphony for the entire orchestra (in C minor, op.11). At the age of sixteen, the String Octet was typed in Es-major, the first piece that shows the full strength of his genius. The String Octet and his Overture at Shakespeare's Drama of the San Summer Nights, which he wrote a year later, are his most famous early works. (He wrote a drama music sixteen years later, including the famous Wedding Marsh). In 1827 his opera Die Hochzeit des Camacho was performed. Fiasco of the opera repelled him to re-engage in this genre; later on for some time in the forties he experimented with the Eugene Skribe libretto based on Shakespeare's Storm, but rejected it as inappropriate.
In 1829, Mendelssohn first visited Britain. Visits to Britain inspired him to write two famous works, the Hebrew overture and Scottish Symphony (Third Symphony). His oratory Ilija was premiered in Birmingham on the Music Triennial on August 26, 1846.
Mendelssohn died on November 4, 1847 in Leipzig after a series of heart attacks. The requiem was held in the Church of Saint Paul, and he was buried at the Holy Trinity Cemetery in Berlin.
Author: Nebojsa Djumic
Publisher: Poste Srpske a.d. Banjaluka