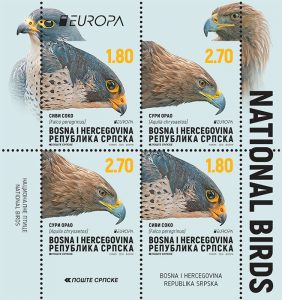 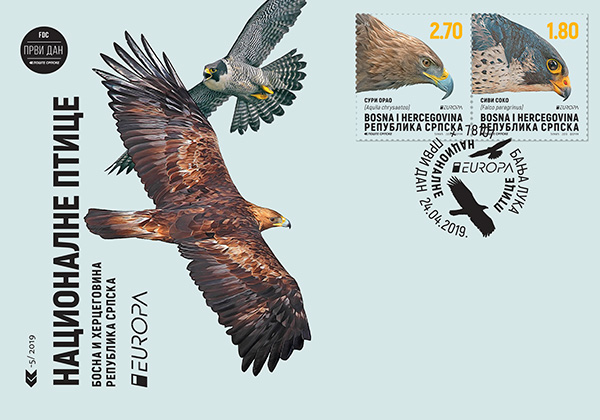 Aquila chrysaetos (golden eagle) is a large and powerful bird of pray, long 80-93 cm with a wing span of 195-220 cm. It has dark-brown feathers, while the head, occiput and neck are golden and light brown. The male and female are similar in feather shapes, while the female is larger and heavier.

Golden Eagle has a Holarctic prevalence. It settles much of Europe, but it does not exist in its western part. It also settles Siberia and Asia to Japan, as well as North America and some parts of North Africa. It is typical tenant, but there is a record of the vagrancy of young individuals. He lives lonely by inaccessible mountain hills, cliffs and canyons rarely inhabited by man. Eagle nests on rocks, although there are some cases of nesting on trees.

It feeds on live caught or rarely dead mammals, birds and reptiles, rarely amphibians or insects. The prey is hunted most often on open-air terrains, sailing or sliding low above the ground, then from the observation post, while it catch the birds on the ground or a sometimes in flight, crashing from a high altitude.

Falco peregrinus (Peregrine Falcon) is known as the fastest animal in the world that, during its crash, reaches a speed of over 320 km/h. The wings range varies from 80 to 120 cm, and the body length is 34 to 58 cm, with the females are larger. Both the male and the female have dark gray (almost black) feathers on the back and upper part of the wings, while the tips of the wings are completely black. The lower part of the body is bright and stained with dark brown and black spots. The long and narrow tail is stained in the same way, and the feathers end with a white ribbon and a black tip. The head (eyes and face) is black, while the portion below the paw and neck is bright. The beak and the legs are yellow.

It has cosmopolitan prevalence. European prevalence covers practically all countries. In Bosnia and Herzegovina, it predominantly lives in the mountainous region, although it can also be seen in the lowlands during the winter months.

The falcon nests primarily on rocks, although there are cases of nesting on buildings or on trees and directly on the ground. It is fed exclusively to birds, especially those of medium size, although it can overcome a much larger prey. The prey is always caught in flight.