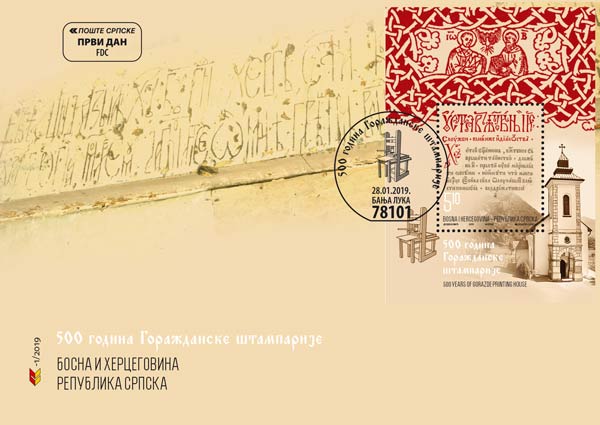 The Gorazde printing house was the first printing house on the territory of the Republic of Srpska and Bosnia and Herzegovina. It was founded in Venice in 1519, but was soon transferred to the Orthodox Church of Saint George in Sopotnica near Gorazde, in Hercegovina Sandzak. The printing house was founded and started by Bozidar Ljubavic, also known as Bozidar Gorazdanin, who was a prominent trader from Gorazde. His son Teodor Ljubavic, hieromonk from the Milesevo Monastery, led the work of the printing house. It worked until 1523, printed three books, which are considered among the better achievements of then printing houses. After 1523, it was transferred to the Romanian town of Trgoviste, and according to some data, a part of the printing house was transferred to the Milesevo monastery near Prijepolje.
In the period from 1519 to 1523, printing house published three books of the liturgical character: Liturgy (Servant) 1519, Psaltir sa posledovanjem 1521, and Molitvenik (Trebnik) in 1523.
Books of the Gorazde printing house were printed in Serbian language, Cyrillic letters, according to the rules of the Resavska school, with the elements of the older, Slavic spelling. The letters were cut down modeled on the Serbian manuscripts, which, along with a relatively large spacing between the lines, made this book quite transparent. It was decorated, according to the Serbian manuscripts, flags and initials that were printed with woodcarving technique. The basic text is made in black. In addition to the initials, titles and two flags in the Liturgy, the red color was used in the highlighting and decoration of some important places in the basic text.
The Liturgy from 1519 is the first book of the Gorazde Printing House. There are 101 printed pages of the evening, morning and liturgy of Jovan Zlatousti and Vasiliy the Great. As the frequent title of this book in the literature is the Russian title Sluzabnik.
Psaltir sa posledovanjem from 1521, with its 352 papers, is the most prominent book of the Gorazde Printing House.
Molitvenik (Trebnik) from 1523, the last edition of the Gorazde Printing House, contains the prayers necessary for carrying sacred secret and other rituals.