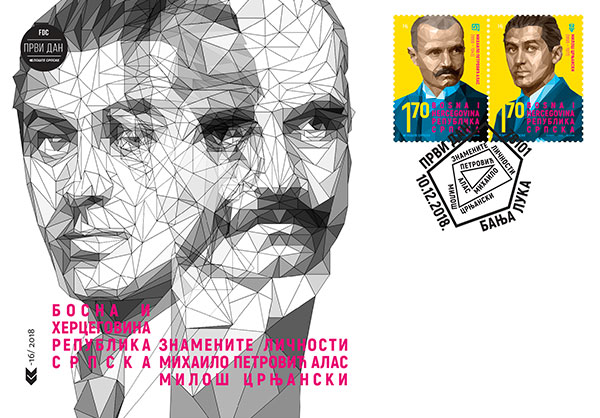 Mihailo Petrovic Alas was a Serbian mathematician, professor at the University of Belgrade, academician of the Serbian Royal Academy and Alas. He was born in 1868 in Belgrade. He completed the First Belgrade Gymnasium in a generation with many giants, about which a novel was written and a TV-film "The Hatchet of Professor Kosta Vujic" was filmed. Studies in Belgrade he ended in 1889. At Sorbonne he graduated in mathematics and physics, and in 1894 he defended his doctoral dissertation. He was a regular member of the Serbian Royal Academy when he was 31 years old. He was a member of the Academy of Sciences in Prague, Warsaw and Bucharest, and a member of several scientific-mathematical societies in the world.
According to his scientific work and results Mihailo Petrovic Alas belongs to the largest Serbian mathematicians, the only mathematician among the 100 most famous Serbs. He was a member of the Balkan Wars and the First World War as an officer. He was engaged in fishing, hence his nickname was Alas. In 1882 he became a fishing apprentice, then a kalfa, and in 1895 he passed the exam for a fisherman's master.
Milos Crnjanski was a Serbian writer and one of the most important authors of Serbian literature of the 20th century. He was born in 1893 in Csongrád (now Hungary). He emerged as a poet, narrator, novelist and publicist. He is among the 100 most famous Serbs.
Milos Crnjanski graduated from elementary school at the Serbian religious school in Timisoara, and graduated from the Timisoara Gymnasium. In his own words, he was the central pupil to his father's death, and then he resolved "to be among the first in the future," which he had accomplished. The first song "Faith" Crnjanski published in the Sombor children's paper "Pidgeon" in 1908. In 1930, he received a prize from the Serbian Academy of Sciences for the novel "Migration".
Crnjanski returns from the bloody battlefields to his thoughts about the necessity of breaking down the false myth of the "eternal" values of civil ethics, and thirty million innocent dead people found places in the antiwar verses of this unfortunate young warrior. The second world war and a long series of post-war years Crnjanski spent in emigration.
He returned to Yugoslavia in 1965. In search of the shores of his life, he saw Belgrade with joy. In verses devoted to Belgrade, and he expressed his feelings of returnees with long life odyssey in astonishing and inspirational manner.
Author: Nebojsa Djumic
Publisher: Poste Srpske a.d. Banjaluka