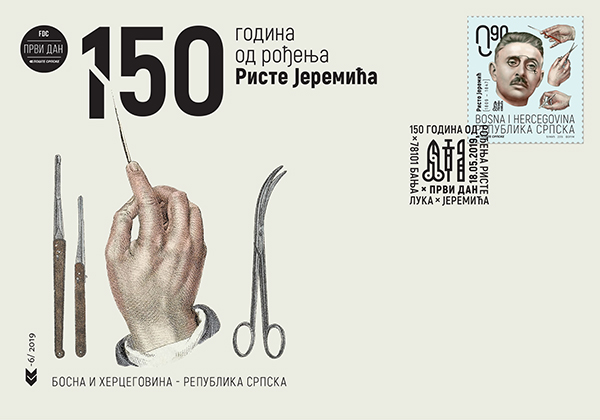 Dr Risto Jeremic was born in Foca on May 18th 1869, father Jovo and mother Krista, and died on September 16th 1952 in Mostar, where he was buried. In his home town he completed the Serbian Primary School. He started his high school in Sarajevo to continue in Dubrovnik, where he also graduated on July 29, 1889. He then enrolled in the Faculty of Medicine in Vienna to complete it in Graz, where he graduated in 1897. As a student, during school breaks, in 1892 he attempted to establish the „Focanski Soko'' gymnastics association in Foca, banned from the Austrian authorities, which was the forerunner of the ''Srpski Soko''. Upon completion of the studies, Dr. Risto Jeremic works at the Earth Hospital in Sarajevo, first as an intern, and then as a secondary doctor and a district doctor. He opts for the specialization in the field of surgery and thus becomes the first domestic surgeon from the territory of the former Bosnia and Herzegovina. In that time, he was one of the initiators and founder of the Serbian Educational and Cultural Society "Prosvjeta" in Sarajevo, whose president was in the period from 1903 to 1904.
From 1904 until the First World War he was the head of the Surgical Department of the Hospital in Tuzla. In that city, in the meantime, he built a sanatorium in which he opened the doors to all patients regardless of their property status. After the Sarajevo assassination, together with numerous free and respectable Serbian champions, he was arrested and brought to the court on the so-called "Traitor proces" in Banja Luka. He spent nearly three years in jail. After the First World War he worked briefly in Tuzla, starting in 1919, he went to Sarajevo, where he will be director of the National Hospital for four years, who will be renamed to the State Hospital at the time of his administration.
In his long life, he has written and published 15 scientific and professional books and more than 70 articles in the fields of medicine, health culture, pharmacy, ethnology, anthropology, history, geography and language. He was promoted to honorary doctor of the Belgrade University on December 22, 1937. This great acknowledgment was given exactly 40 years after obtaining the GPO in Graz. During the Second World War, he was one of the vice-presidents of the Central National Committee. After the Second World War, the Serbian Medical Society based in Belgrade chose him as his honorary member, and in 1952 he became a member of the Scientific Society of Bosnia and Herzegovina.
Author: Nebojsa Djumic
Publisher: Poste Srpske a.d. Banjaluka
Cooperation: PI Museum of old Herzegovina and Curator-historian Danko Mihajlovic, Foca