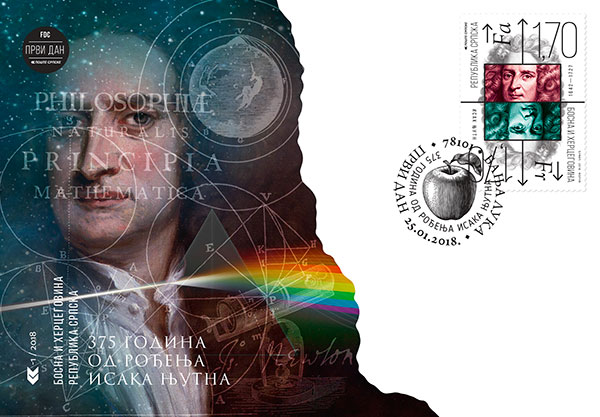 Isaac Newton was an English physicist, mathematician, astronomer, alchemist and philosopher of nature, who today is for most people one of the greatest figures in the history of science. He was born on January 4, 1643 in Lincolnshire, and died on March 31, 1727, in London.

His study Mathematical Principles of Natural Philosophy, published in 1687, describing universal gravitation and three laws of motion, laid the foundations of classical (Newtonian) mechanics and served as an example of the emergence and development of other modern physical theories. Carrying out this Kepler system of planet motion, he was the first to show that the movements of the body on Earth and the movements of celestial bodies are subordinate to the same physical laws. The uniting and deterministic power of his laws led to a revolution in science and to further progress and elevation of heliocentrism.

In mechanics, Newton also pointed to a new, great, significance of the principle of maintaining the impulse and moment of the impulse. In optics, he made the first practical reflection (mirror) telescope and discovered that by passing white light through a glass prism, it splits into a spectrum of all colors. Newton strongly advocated for the partial nature of light. He also formulated the empirical law of cooling, studied the speed of sound, and proposed the theory of the origin of the stars. In mathematics, Newton shares credit with Gottfried Leibnitz for the discovery of an infinitesimal account. He also presented the general binomial theorem, developing in this way the so-called "Newtonian Method" for approximating the zero function and contributing to the studies of the decomposition of functions into rows.

God said "Let Newton be" and all was light.)